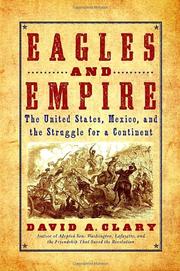 The United States, Mexico, and the Struggle for a Continent
by David A. Clary
Age Range: 1846 - 1848
BUY NOW FROM
AMAZON
BARNES & NOBLE
LOCAL BOOKSELLER
GET WEEKLY BOOK RECOMMENDATIONS:

The former chief historian for the U.S. Forest Service examines one of the most ignominious chapters in American history: the Mexican-American War.

It’s a measure of Mexico’s continuing weak-sister status that the 1846-1848 conflict—because of its implications for the contentious issue of American slavery and because it introduced characters that later loomed much larger in American history—is still too often treated by Anglos as a mere dress rehearsal for the Civil War. Clary (Adopted Son: Washington, Lafayette, and the Friendship that Saved the Revolution, 2007, etc.) considers the war on its own terms, giving particular attention to both sides’ mismanagement of the bloody enterprise. With the exception of the dutiful Kit Carson, virtually none of the well-known historical figures come off creditably here. These include a succession of hapless U.S. ministers to Mexico; the many prominent intellectuals and Whigs who ineffectually opposed this “most unrighteous war”; the micromanaging, near-paranoid President James Polk; the vainglorious caudillo Santa Anna; “The Pathfinder,” John C. Fremont, a blundering egomaniac richly deserving of his court martial; “Old Rough and Ready,” Zachary Taylor, who kept one eye on his political future while allowing horrible atrocities by his occupying army; and “Old Fuss and Feathers,” Winfield Scott, a competent army administrator but a dull-witted soldier in the field. Both generals owed their victories to a talented officer corps, superior artillery and the enemy’s poverty, corruption and inefficiency. The war began with each country announcing the other had invaded and ended with Mexico losing half (counting Texas) its territory. Readers put off by Clary’s occasional too-breezy locutions—he refers, for example, to America’s lust for the continent’s west coast as “California dreaming”—will inevitably succumb to the narrative’s headlong spirit, recounting one slapdash improvisation after another that rearranged the continental map.

A lively history of the war that humiliated Mexico and accounts for an enduring grudge against its northern neighbor.

MORE BY DAVID A. CLARY

ADOPTED SON
by David A. Clary

THE BLOOD OF HEROES
by James Donovan
Nonfiction