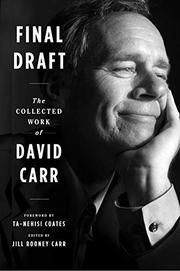 A collection of key pieces of the renowned journalist, who died unexpectedly at 58 in 2015.

Arranged more or less chronologically, these pieces commence in the 1980s, when Carr (The Night of the Gun: A Reporter Investigates the Darkest Story of His Life, His Own, 2008), a Minnesota native, was a freelancer in his home state. Gradually, we move through his other gigs: Family Times (a monthly local in the Twin Cities), Twin Cities Reader, Washington City Paper, Atlantic Monthly, New York Magazine, and the New York Times, where he died in the newsroom. The earlier pieces include some very personal ones about his substance abuse and struggles with cancer, but there are also investigative pieces about other assorted topics, including hungover airline pilots and a gay political candidate. Throughout are a number of celebrity profiles: Tom Arnold, Sally Quinn, Neil Young, Bill Cosby, Philip Seymour Hoffman, Robert Downey Jr. (In the Cosby piece, Carr chides himself for not pursuing the rape allegations about the now-incarcerated comedian.) The author also provides coverage of Bill Clinton’s impeachment, 9/11, and the journalism profession (plagiarism, Fox News, the toxic effects of Ann Coulter). Related to all of this is an 11-page copy of a journalism syllabus for a course he taught at Boston University. Sometimes the pieces are thematically arranged. Near the end are two separated by 12 years; both deal with the view as drivers approach New York City (the author was commuting from New Jersey at the time). Throughout the book, Carr displays profound care about his craft, flashes of humor, and, when necessary, genuine fangs: See his 2015 piece about a neighbor’s cat, and witness the gleam of his verbal scalpel that vivisects Coulter. Carr’s wife, Jill, served as the editor for the book, and Ta-Nehisi Coates, who worked for Carr at Washington City Paper, provides the foreword.

A revelatory collection reminding us of what journalism used to be—and what it ought to be.