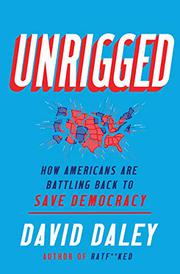 How Americans Are Battling Back To Save Democracy
by David Daley
BUY NOW FROM
AMAZON
GET WEEKLY BOOK RECOMMENDATIONS:

An uplifting story of how grassroots political movements around the nation are forcing significant changes in how our government operates.

Former Salon editor Daley wrote his first book, Ratf**ked (2016), to show how Republicans in many states have used gerrymandering and voting manipulation to guarantee total control of many levels of government for years, even decades, into the future. Guided by powerful new algorithms, they made it virtually impossible for Democrats to defeat them. In his latest book, however, the author offers a much more hopeful outlook, writing about nonpoliticians who have started a powerful new political movement that is catching on across America and is showing every sign of accelerating. One story tells of a 27-year-old woman, an employee in a recycling nonprofit, who wrote on Facebook that she wanted to “take on gerrymandering in Michigan” and asked if anyone was interested. Ultimately, she was able to get portions of Michigan’s constitution rewritten. Similar movements soon followed in Colorado, Utah, Ohio, and Missouri, all of which faced powerful opposition, and all of which won. Then, as it became clear that 25 other states had passed laws designed to make it harder for Democrats to win elections—and more difficult for people of color to vote—citizens in those states joined the fight. They won battles dealing not only with gerrymandering, but also with such issues as voter ID laws, precinct closures, voting roll purges, voting rights for released felons, and more. As Daley clearly shows throughout this inspiring text, it was always “ordinary” citizens who led the way, often people who had never participated in politics. They took to the streets, circulated petitions, ran for office, and launched or joined organizations, and they did it while facing overwhelming odds and severe opposition from elected officials. But they never gave up, and they almost always won.

A book for anyone who wants to effect major change but thinks they can’t.

ONE PERSON, NO VOTE
by Carol Anderson
Nonfiction