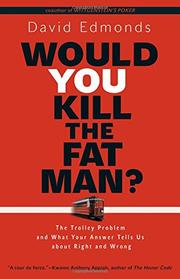 WOULD YOU KILL THE FAT MAN?

The Trolley Problem and What Your Answer Tells Us about Right and Wrong
by David Edmonds
BUY NOW FROM
AMAZON
BARNES & NOBLE
LOCAL BOOKSELLER
GET WEEKLY BOOK RECOMMENDATIONS:

An investigation into how we make moral decisions.

A trolley is hurtling down a track on which five people are tied to the rails. You are standing on a footbridge beside a fat man, a stranger to you. If you push him onto the tracks, he’ll stop the trolley. Of course, he would die; but you would have saved five people. Do you kill the fat man? This thought problem, invented by philosopher Philippa Foot, is central to Edmonds’ (co-author: Philosophy Bites Back, 2013, etc.) sprightly history of moral philosophy. The author is a master at distilling the work of some difficult writers, most importantly Immanuel Kant and Jeremy Bentham, whose opposing views are still being debated. Kant believed in certain moral absolutes—murder is wrong, for example—that should never be breached. Bentham, the father of utilitarianism, believed that moral actions are those that cause the greatest good, ensuring pleasure and well-being to the most people. Presenting contemporary perspectives, Edmonds turns to philosophers such as John Rawls, Bernard Williams, and utilitarian Peter Singer; behavioral economists, such as Daniel Kahneman; psychologists, such as Jonathan Haidt and Joshua Greene; and neuroscientists, such as Antonio Damasio. How, these thinkers ask, do we distinguish “between negative and positive duties, between doing and allowing (killing and letting die), and between acting and omitting?” Moral decisions raise big questions: Do we, for example, have free will? Are we more charitable if we have just had a positive experience, such as a delicious lunch? Are we programmed genetically to act morally? Are we guided as much, or more, by intuition—a gut feeling—as by rational thinking? And finally, “do philosophers have any special authority over—any unique insight into—what’s right and what’s wrong?”

As Edmonds amply and lucidly shows in this cogent book, moral questions have no easy answers.

THE LIFE YOU CAN SAVE
by Peter Singer
Newsletter sign-up