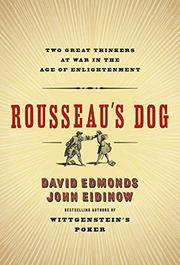 The authors of Wittgenstein’s Poker (2001) once again dissect a contentious encounter between two celebrated philosophers, this time Age of Reason luminaries David Hume and Jean-Jacques Rousseau, who find it impossible to reason together.

Rousseau, self-professed lover of mankind, didn’t much love individual men and ended up irritating and alienating almost everyone on the continent, except for his dog and his longtime housekeeper/mistress. As his reputation grew, colleagues, governments, churches and kings heartily returned his scorn, censoring his works and routinely banishing him. Nothing could have better pleased one so disposed to see himself as a victim. And no one could have been more ill suited to entanglement in the affairs of the suspicious, nearly paranoid Rousseau than Edinburgh’s sober-sided Hume who, ignoring friends’ warnings, agreed to accompany and sponsor the Genevan’s flight to Britain in 1766. From mutual expressions of esteem and affection, their relationship quickly deteriorated. What caused the rift? Rousseau, who saw plots everywhere against him, overheard Hume talking strangely in his sleep, took offense at anonymous small charities and suspected his benefactor of being the instigator of “the King of Prussia letter,” a lampoon in fact written by Horace Walpole. Not even George III’s offer of a pension, engineered by Hume, could quench Rousseau’s righteous wrath. Accusatory and self-justifying letters flew, and soon the quarrel became public, forcing the 18th-century European intelligentsia and its noble patrons to take sides. James Boswell, Walpole, Adam Smith and Voltaire all play varying roles in the story, a celebrated anecdote in the history of philosophy now available to the general reader in all its delicious, gossipy detail. Edmonds and Eidinow seem especially to delight in the spectacle of the normally genial and mostly blameless Hume flailing, eventually driven to behave as badly as his obsessive antagonist.

An enthralling account of a trifling provocation inflated to epic proportions.

WOULD YOU KILL THE FAT MAN?
by David Edmonds
Nonfiction