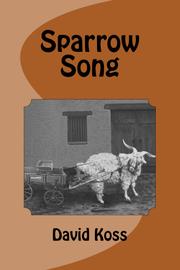 A Novelette of the Arizona Territory
by David Koss
BUY NOW FROM
AMAZON
BARNES & NOBLE
GET WEEKLY BOOK RECOMMENDATIONS:

A tender debut novella that captures the doubts and imagination of a 12-year-old boy living in the Arizona Territory.

Darius Mallen wants so very much to be a well-behaved, responsible young boy. But once he gets into his father’s “Studebaker Junior” wagon, pulled by the amiable and swift-footed goat Dodie, he just can’t resist competing with Big Otis Sompkins. Both boys deliver goods from their fathers’ respective businesses. On his wagon—with his Jack Russell terrier, Jersey, riding shotgun and egging on Dodie—Darius shines despite his slight stature and withered right foot. Unfortunately, the races through town are upsetting the local folk, who must jump out of the way. When the sheriff has had enough, he threatens to haul Darius and Otis into jail. Darius’ uncle proposes a solution: they will hold a goat race on the first day of the town’s major annual festival. The winner will hold the title King of the Race, and the boys will promise to never again race through town. Optimistic and sure of his prowess as wagon master, Darius indulges in visions of cheering crowds as he crosses the finish line. The sheriff tells Darius he has a substantial bet on his victory and that he had better win. The boy’s exhilaration turns to terror. Within the space of two short chapters, Koss manages to evoke the innocence, insecurity, and bravado of those fleeting moments between childhood and adolescence. And although the prose is simple and unadorned, Koss successfully creates the excitement of the race itself in blow-by-blow detail: “Slamming into the wash, Darius felt his wagon grind to a stop as the mud dragged and swallowed the bottoms of his wheels. Dodie, bleating loudly in shock and alarm, struggled against the harness, lost her footing, and fell.” An efficient wordsmith, Koss manages to define the essential difference between the two boys through one incident: Darius pauses racing to stop Otis from whipping his bleating goat, Blueberry.

THE CATCHER IN THE RYE
by J.D. Salinger
Indie

TIED UP WITH STRINGS
by Madeline McEwen
Indie