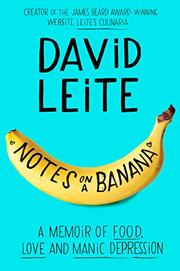 NOTES ON A BANANA

A Memoir of Food, Love, and Manic Depression
by David Leite
BUY NOW FROM
AMAZON
GET WEEKLY BOOK RECOMMENDATIONS:

A James Beard Award–winning food blogger tells the story of his struggle to come to terms with his Portuguese heritage, bipolar disorder, and homosexuality.

The son of two immigrants from the Azores, Leite (The New Portuguese Table: Exciting Flavors from Europe's Western Coast, 2009), nicknamed “Banana,” grew up in a Massachusetts town that was “pretty much in the geographic armpit of the state.” His one joy was being around the “Sisters of the Spatula,” the women who, along with his mother, ruled his childhood with love and food. But the older he became, the more Leite wanted to eat hamburgers and cakes smeared in “swirls of Betty Crocker chocolate frosting.” Fitting in became an even greater challenge during his adolescence, which was marked by episodes of extreme panic, anxiety, and insomnia. Further complicating Leite’s situation was the realization that his fondness for looking at male underwear models in the Sears catalog signaled a nascent homosexuality he desperately wanted to disavow. In college, the author had affairs with men while “dating” a woman he fantasized would be his wife but with whom he could never have sex. He also began experiencing the chaotic extremes of the bipolar disorder that psychologists had mistakenly diagnosed as depression. Leaving college without a degree, Leite went to New York, where he worked first as a waiter then as an ad writer while unsuccessfully trying to turn straight through involvement with the “gay curing” Aesthetic Realism movement. A long-term relationship with a man who “loved everything about the ceremony of the table” led to Leite’s reimmersion in the cooking he loved and the Azorean culture from which he had separated himself. It also gave him the courage to seek the answers that had eluded him and his doctors about the truth of his condition. In this coming-of-age story and chronicle of self-acceptance, Leite impressively finds honesty and humor in the darkest of circumstances, making this a strong debut memoir.

A brave and moving tale of food, family, and psychology.

I, BIPOLAR
by D.S. Black
Nonfiction

The Body of Chris
by Chris Cole
Newsletter sign-up