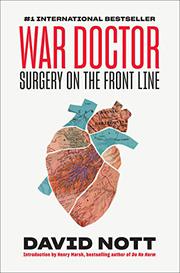 Surgery on the Front Line
by David Nott
BUY NOW FROM
AMAZON
GET WEEKLY BOOK RECOMMENDATIONS:

A physician’s memoir of service in war zones around the world.

Even during training, British surgeon Nott thrilled to hear stories of colleagues who delivered care in poor, often war-torn nations. After receiving a post at Charing Cross Hospital in London in 1992, he proceeded to do the same. Many international charities, such as the Red Cross, require a substantial commitment, so they often attract retirees or the wealthy. Like many physicians in their prime, Nott chose to work with Doctors Without Borders, founded in France, which accepts volunteers for as little as a few weeks. Almost immediately, the author was sent to Sarajevo, under siege during the vicious civil war in the former Yugoslavia. There followed tours in Africa, Iraq, Afghanistan, Libya, Haiti, Palestine, and, more recently, Syria, where he encountered countless heartbreaking examples of the enormous suffering humans inflict on each other in times of political violence and war. Quickly learning that dealing with the catastrophic injuries from explosives and high-velocity bullets required skills not taught during surgical training, he found himself making lifesaving decisions under primitive conditions, often without technical aids. Most readers will know what to expect, and Nott does not disappoint, delivering riveting, generally gruesome stories of victims who came under his care and the professionals, mostly admirable, who worked with him. He is not shy about discussing his work, so readers will learn much about how battle surgeons go about their job. Nott soon discovered that this was knowledge other volunteers and nearly all local doctors were also lacking, so he began to teach a course entitled “Surgical Techniques in Austere Environments,” which caught on. The author’s efforts to publicize these horrors made him well known—and this book was a No. 1 bestseller in Britain—but unfortunately persuaded no Western governments to take action to end them, which they (unlike the humanitarian organizations) had the power to accomplish.

A series of gripping and fascinating medical stories.