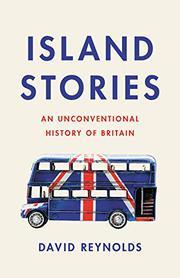 A British historian takes a long view of events that are now rattling the Isles.

“The British…seem like a people who have done things the same way for centuries and can be relied on for stability and common sense,” writes Reynolds (International History/Christ’s Coll., Cambridge; The Long Shadow: The Legacies of the Great War in the Twentieth Century, 2015, etc.), which explains why Brexit has seemed so inexplicable to so many people. In many ways, however, it is of a piece with previous episodes that stretch back at least 1,000 years, not simply in tensions between the U.K. and European alliances, but also in Britain’s relationships with the principalities of old. The isolation that logically results from living on an island was reinforced when Britain had to go it alone after the fall of France in 1940 until forging alliances with the U.S. and the Soviet Union, which Reynolds provocatively writes, “such was the extent of Germany’s early success in 1940 that the Führer had, in effect, called the superpowers into existence to redress the balance of the Old World.” The U.K. was not among these superpowers, leading to a sense of “declinism” that became a powerful counterargument to Britain’s previous championing of what the author deems an “ideology of freedom [that] was real at the time and has exerted a lasting influence.” With declinism, marked by episodes such as Margaret Thatcher’s being outplayed by continental colleagues such as François Mitterrand and Helmut Kohl, has come another spate of that going-it-alone resignation. Reynolds peppers an always interesting text with side notes on things such as the relative lack of much of a dent, in terms of DNA, of the Norman conquest on the British Isles. He also offers some nice snark about some of the current players on the historical stage, among them Theresa May and Jeremy Corbyn, who “seemed even less qualified for his job than May was for hers.”

A witty and revealing look at long-term patterns in British history.

IN COMMAND OF HISTORY
by David Reynolds
Nonfiction