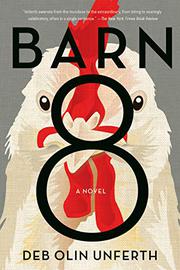 In her last book, Wait Till You See Me Dance (2017), Unferth explored the separate complicated lives of an ensemble of lonely outsiders; here she brings back a similar band of misfits—only this time, they’re in cahoots.

Helmed by a young woman named Janey, Unferth’s narrative takes flight with a seemingly mundane turn of events. After leaving her mother and cozy Brooklyn brownstone for a new life in Southern Iowa with her deadbeat dad, Janey suffers a dose of reality and ends up stuck in a job as an auditor for the U.S. egg industry. While making her rounds through huge, “so-called cage-free” barns, she takes in the harrowing scene of hens “half-smothered and rotting alive...unable to look up and see anything but steel and conveyor belts.” To further drive the horror of this home, Unferth reminds us that chickens, while generally deemed brainless fluff, are actually an incredibly intelligent species even capable of “long-lasting friendships.” Incensed by the heinous conditions she witnesses, Janey joins forces with a fellow auditor to pull off “one of the greatest animal heists in history”: stealing a million hens from one of the town’s largest egg farms. To help them carry out their quixotic mission, they recruit a motley crew of animal activists, undercover investigators, vegan dishwashers, a farm heiress, and tattooed punks, all united by their desire to find hope in a world barreling toward extinction. Ignited by her fiery wit and distinctive voice, Unferth’s novel uses one of America’s most valuable and overlooked institutions as fertile ground to raise questions around the truths people are fed and the ones they turn a blind eye to. In a nation that produces about 75 billion eggs a year, she shrewdly points out that it’s basically become “our patriotic duty” to eat them. While this kind of politically charged rhetoric could risk coming off as pedantic, Unferth’s writing never feels patronizing—more than anything, it’s galvanizing, especially these days when “activism [is] less revolution, more capitalism with a conscience.”

If this novel isn’t a movement, it has enough heart to start one.

WAIT TILL YOU SEE ME DANCE
by Deb Olin Unferth
Nonfiction