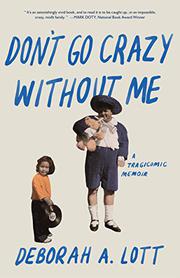 DON'T GO CRAZY WITHOUT ME

A daughter grows up in the whirlwind of her overbearing father.

Once misdiagnosed as a paranoid schizophrenic, Lott (Creative Writing/Antioch Univ., Los Angeles; In Session: The Bond Between Women and Their Therapists, 1999) recounts growing up with a father whose craziness seemed infectious. “My father and I were not ordinary,” writes the author; “oh no, we had formed an alliance around being extraordinary.” In Lott’s noisily dysfunctional family, she and her father, Ira, bonded against her mother and brothers, who thought Ira was irritating, infuriating, and more than a little eccentric. Ira coveted his daughter’s attentions, making her his confidante, flattering her looks and talent. She was a genius, he insisted, and he would gain fame and fortune as the genius father of a child prodigy. Lott adored him, even when he treated her “like an adult playmate, like a collaborator.” She refused to see him as others did: a bizarre neurotic. Usually wearing nothing but underwear, Ira was a jokester, an exhibitionist, and a narcissist who hogged the center of attention. He was also a hypochondriac, intensely focused on what he thought were symptoms of dire diseases and hypersensitive “to any minor shift in the environment.” While Ira complained with “operatic intensity” about various physical ailments, the children strived to get their mother’s attention by complaining even more loudly: of severe allergic reactions, mysterious rashes, and rare strains of salmonella, despite Ira’s “relentless attempts to protect us from food poisoning.” Ira did have some serious health problems, including asthma, borderline diabetes, high blood pressure, and obesity; through the years, he became addicted to painkillers and sleeping pills, supplied by “a sympathetic and equally addicted local pharmacist.” After his mother died, Ira descended into depression, refusing to shower, shave, get dressed, work, or eat anything but “soft foods suitable to a toddler’s palate.” He became obsessed with death and dying, and since Lott was viscerally in tune to his needs, she became obsessed, too, pushed almost to the brink of sanity.

A candid, unsettling family portrait of madness and enduring love.