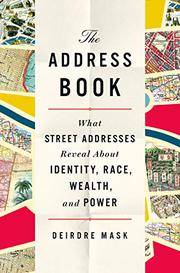 An impressive book-length answer to a question few of us consider: “Why do street addresses matter?”

In her first book, Mask, a North Carolina–born, London-based lawyer–turned-writer who has taught at Harvard and the London School of Economics—combines deep research with skillfully written, memorable anecdotes to illuminate the vast influence of street addresses as well as the negative consequences of not having a fixed address. Many readers probably assume that a street address exists primarily to receive mail from the postal office, FedEx, UPS, and other carriers. Throughout this eye-opening book, the author clearly demonstrates that package deliveries constitute a minuscule part of the significance of addresses—not only today, but throughout human history. Venturing as far back as ancient times, Mask explores how the Romans navigated their cities and towns. She describes the many challenges of naming streets in modern-day Kolkata (Calcutta), India, where countless mazes of squalid alleys lack formal addresses. “The lack of addresses,” writes the author, “was depriving those living in the slums a chance to get out of them. Without an address, it’s nearly impossible to get a bank account”—and the obstacles compound from there. Mask also delves into the controversies in South Africa regarding addresses, issues exacerbated by apartheid and its aftermath. In the U.S., one can track racist undertones via streets named for Confederate icons such as Robert E. Lee and Stonewall Jackson. The author offers insightful commentary regarding the fact that U.S. roadways named for Martin Luther King Jr. are usually found in poverty-stricken urban areas, and she addresses the many problems associated with homelessness. She also explores the dark period of Nazi Germany when street names identified where concentrations of Jews lived, making it easier for them to be rounded up and sent to the death camps. In a chapter prominently featuring Donald Trump, Mask explains the monetary and prestige values of specific addresses in New York City. Other stops on the author’s tour include Haiti, London, Vienna, Korea, Japan, Iran, and Berlin.

A standout book of sociological history and current affairs.