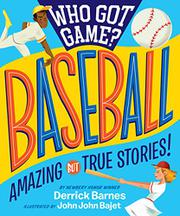 Although Barnes doesn’t really stick to the “unheralded figures and untold stories” he says he’ll highlight, still he does tuck some less-heralded hijinks and heroes into an anecdotal rush that captures the “joy and wonderment that is baseball.” So, along with tributes to the likes of Satchel Paige and Negro Leagues founder Rube Foster, he tips a cap to Ozzie Vergil, the first Dominican major leaguer; slugger Hank Greenberg, the “Hebrew Hammer”; “Tommy John” surgeon Dr. Frank Jobe; and four African Americans who played professionally before Jackie Robinson. Not to mention a nine-inning, 49-run game and another that went 33 innings. In formal, neatly drawn cartoons, Bajet tones down some of the wilder incidents, giving his subjects—even mascots—dignified presences and, usually, welcoming smiles. Fans budding or confirmed will need to look elsewhere for an organized baseball history or highlights reel, but they will come away feeling as if they’d sat in the bleachers with a true enthusiast who’s helped them earn “some idea of how much of a challenge it was for players of color, players from outside the United States, and for women to be part of this beautiful game.”

THE KING OF KINDERGARTEN
by Derrick Barnes
Children