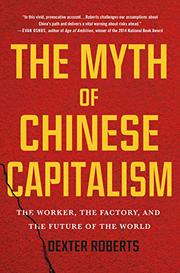 THE MYTH OF CHINESE CAPITALISM

The Worker, the Factory, and the Future of the World
by Dexter Roberts
BUY NOW FROM
AMAZON
BARNES & NOBLE
LOCAL BOOKSELLER
GET WEEKLY BOOK RECOMMENDATIONS:

A gimlet-eyed look at an economic miracle that may not be so miraculous after all.

China’s economic transformation since the death of Mao Zedong may be impressive. However, writes Roberts, who was a Beijing-based economics and business reporter for more than 20 years, it is incomplete, and inequality reigns. One element has been the termination of the agricultural communes of old in favor of private ownership of land, but in many instances, the effect was that farmers gave up their plots in order to move to the city and its greater opportunities. The government’s response, belatedly, was to impose controls on internal migration, meaning, in effect, that many Chinese were “illegal aliens” in their own country. Now that many farmers have left the city and returned to the countryside, it has “become apparent how much the cities and their urban residents had depended on them as restaurant cooks, waiters, and dishwashers, delivery people, drivers of Didi Chuxing (China’s version of Uber), proprietors of small shops and hairdressers, and household cleaners and nannies.” At issue is how those millions of people will make a living back home; so, too, is how money is distributed in China’s evolving financial system. Most credit is extended to state-owned enterprises, Roberts writes, crowding out private entrepreneurs. Indeed, even though government policy remains a variant on the “it’s a good thing to grow rich” slogans of old, self-employment is increasingly difficult, and the Chinese version of the “gig economy” seems to be rapidly failing. Deng Xiaoping’s version of trickle-down economics, with residents of the coasts becoming prosperous first and then people in the distant interiors following suit afterward, has not worked, either. The author concludes by noting that while the Chinese government has been able to take credit for the comparative economic successes of the past few decades, it is also vulnerable to attack “for misrule when living standards deteriorate,” to which the inevitable response will be more repression, not more economic freedom.

Of much interest to students of international trade, geopolitical strategy, and global economic trends.