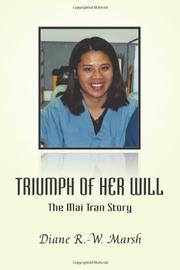 TRIUMPH OF HER WILL

The true story of a Vietnamese family that immigrates to the United States and the terror, heartbreak and joy they experience along the way.

In 1980, 9-year-old Mai Tran and her brother Hieu, 15, manage to escape communist Vietnam by boat, only to endure a long, harrowing trip to nearby Malaysia. Stuck there for six months as they await visas to America, the siblings learn the skillful and sometimes dangerous art of survival by all means necessary. Ultimately, they reunite with their father and other family members in America to begin a new life. Marsh tells the story from Mai’s perspective, so the reader is placed in the unique position of watching Mai grow from a shy little girl into a sophisticated young woman in a strange, new world as she struggles to find balance between Vietnamese traditions and a modern American life. Before she arrives, Mai envisions the United States as a land of great wealth and opportunity, and she’s initially delighted by its creature comforts—running water, toilets and shopping malls, among them. New customs and fashions intrigue her; she had never before worn underwear or celebrated Halloween. But as she grows older, Mai sees that life in her adopted homeland is more complicated than she imagined. While Mai’s story is compelling, Marsh’s storytelling can fall a bit flat and the dialogue may strike some readers as a bit too rudimentary. When asked if she’s looking forward to school starting, Mai responds, “Yes. I didn’t fail second grade, so I’m in the third grade now.” However, Marsh’s attention to detail serves the story well, particularly in evoking memorable suspense like Mai’s near drowning as she attempts to leave Vietnam.

Marsh’s uneven account provides a valuable glimpse into immigrant life and what it means to leave one’s homeland and start over in a foreign country.