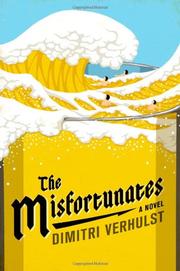 A family of deeply entrenched alcoholics stumbles its way toward grace in this 2007 novel of misadventure from award-winning Belgian writer Verhulst (Goddamn Days on a Goddamn Globe, 2008, etc.).

The grotesque nature of chronic drinking is played as absurdist comedy in Verhulst's book. Admittedly autobiographical, Verhulst’s rendering of pub life and the liver-crushing, free-wheeling lifestyle that has long-term effects on the narrator recalls nothing so much as the bittersweet flavor of Charles Bukowski and, by extension, Tom Waits. There’s something of a meditation on fatherhood; the patriarch of the family takes his son on a tour of the bars immediately after his birth. But unfortunately, the novel’s women become mere afterthoughts to the sport of the day. Drinking, as the narrator Dimmy explains, becomes something of a contest. “God created the day and we dragged ourselves through it,” Verhulst writes. “When we still lived like characters in the songs of Big Bill Broonzy, Omer organized an assault on the world drinking record.” And the men, be it Dimmy’s father or his extended family of uncles, are rather disgusting: sweating, farting, scratching, cursing behemoths for whom beer and the consumption of said is a religion. The novel’s pinnacle comes in the form of “The Tour de France,” a monumental tribute to the pub crawl, replete with the contestants speeding through the suburbs in their underwear. Verhulst wraps things up nicely as Dimitri outgrows his roots. “I’m not one of them, but I’d like to be,” he says. “I wish I could show my loyalty or my love, whatever you want to call those feelings.”

A poetic, no-holds-barred slice of the European lowlife, with lots of drinking.

THE HOUSE OF THE SEVEN SISTERS
by Elle Eggels

THE ALCOHOLIC
by Jonathan Ames
Fiction

THE WOMAN WHO WALKED INTO DOORS
by Roddy Doyle
Nonfiction