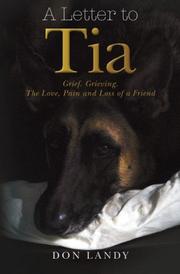 A LETTER TO TIA

Landy (Unconditional Love, 2011), in this memoir, chronicles the emotional highs and lows of helping a dog through devastating illness.

The author and his wife spent 30 years raising show cats but never included a dog in their family—until a cold and hungry stray named Lokey showed up at their door. After caring for Lokey and finding him a home, they realized they needed to bring a new canine friend into their lives. They adopted a 9 1/2-week-old German shepherd, Sabrina, and Landy felt overwhelmed by the love he felt for, and received from, this very special animal. When it came time for Sabrina to “cross the Rainbow Bridge” due to cancer, Landy was distraught beyond anything he could have imagined. He spent eight months trying to understand his extraordinary grief and pain, but when he brought home a baby shepherd named Tia, a new romance began. At the tender age of 4, though, Tia was diagnosed with inoperable cancer, and Landy swore he would do everything possible to help her beat the odds—despite a 10 percent chance of survival. At times, this memoir serves as a tribute to both Tia and Sabrina; Landy’s nightly ritual includes an entreaty to the late Sabrina to watch over her “sister” and give her the strength to keep fighting. Overall, this slim volume is a very personal, articulate account of the author’s journey through the grieving process, and it may help readers through the loss of their own four-legged family members. “Don’t let anyone tell you that the healing process doesn’t take time,” Landy writes. “It may be difficult for some to understand the everlasting bond that was created.”

THE BOOK OF BARKLEY
by L. B. Johnson
Nonfiction