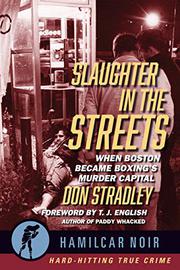 SLAUGHTER IN THE STREETS

This third installment of the Hamilcar Noir series examines key figures of an era when Boston’s boxing scene had strong ties to organized crime.

In his latest book, Stradley (Berserk, 2019) continues to explore boxing’s seedy underside by presenting readers with a gallery of biographical portraits from a period in Boston history when the sport and mob violence were frequently linked. Delivering staccato and cinematic details, the author looks at the 20th-century thugs, waterfront rats, and promising local youths whose lives became entangled with the gangsters, sharklike cops, and backroom politicians who created and sustained the old world of Boston ward politics. In economical passages, Stradley shows how surprisingly often the thread connecting all these men was boxing. The tough guys had entered the ring in their teens with varying degrees of success, and the mobsters used the sport as the hub of many of their racketeering operations. Chapters covering the late 1920s to the ’70s are quick and pithy, filled with colorful figures unearthed by the author’s exhaustive research. Readers learn about Eddie “Punchy” McLaughlin, who’d been a promising local Charlestown boxer in his youth but had quickly moved on to lead his own street fighters in a war against the notorious Winter Hill gang (“highlighted by daytime shootouts, car bombs, assassinations, and even a beheading”). In 1964, enemy shooters disguised themselves as rabbis to get close to McLaughlin (he survived this skirmish and a subsequent attempt on his life but was eventually gunned down on a street in broad daylight, like so many of the book’s characters). There was also the formerly well-regarded lightweight prospect Rico Sacramone, “just another Boston kid who fell in love with the cut-rate allure of gangsters,” as the author puts it, noting the paranoia that eventually took over the man’s thoughts: “He paid first with his mind, then with his life.”

Stradley adheres fairly consistently to the Hamilcar Noir style for his gritty, true-crime narrative: The bizarre excitement of the stories is never allowed to drift into admiration or emulation. As in his previous work, the author narrates an almost unbroken string of horrible, unethical, and illegal choices on the part of all his characters, and he deftly acknowledges the dramatic nature of their mindsets. “He was a risk taker,” Stradley writes about 26-year-old Newton ex-fighter Rocco DiSeglio’s drift from boxing to crime. “To fight for a living, to put a lot of money down on a long shot, to rob someone at gunpoint, requires an element of risk unknown to the average person.” With hard-edged prose and a total absence of cheap moralizing, the author emphasizes that the gambles these men took were bad, immoral, and inevitably self-destructive. Well-known Boston mob figures like James “Whitey” Bulger and Stephen Flemmi crop up in these pages, and some of Stradley’s riveting tales manage to touch briefly on the mainstream world of ’70s boxing (one chapter recounts a grizzled Somerville has-been’s exhibition match with none other than Muhammad Ali). But the main focus here is on the small fry, the unknown losers caught up in the rush and tawdry thrills of mob violence, going from fights to shootouts to prison stays to more brutal acts until their luck finally ran out.

The two-bit thugs of Boston’s underworld star in this stark and gripping account.