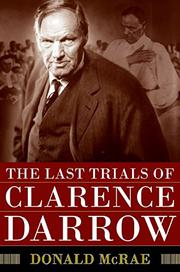 THE LAST TRIALS OF CLARENCE DARROW

A vivid re-creation of the three trials that capped the career of America’s most famous attorney.

The 1911 trial of the McNamara brothers for firebombing the headquarters of the Los Angeles Times, memorably recounted in Howard Blum’s American Lightning (2008), ended in an unpopular plea bargain for the union agitators and charges of jury tampering against their celebrated attorney. Though never convicted, Clarence Darrow lost his privilege to practice law in California and the support of the labor movement to whom he’d been a god. More than a decade later, by then in his late 60s and still stinging from the humiliation that had brought him to the brink of suicide, Darrow took on three cases, all worthy of being termed “trials of the century.” McRae (Every Second Counts: The Race to Transplant the First Human Heart, 2006, etc.) takes us through each of the trials in novelistic detail and delivers an intimate portrait of the complicated Darrow. By defending Nathan Leopold and Richard Loeb, two privileged Chicagoans who killed a teenager for sport; John Scopes, who violated Tennessee law by teaching evolution; and Ossian Sweet, a black doctor charged with murder for defending his Detroit home against a white mob, Darrow vaulted once again into the headlines and burnished his reputation as a weaver of courtroom miracles. Even in the unsuccessful Scopes Monkey Trial, Darrow’s devastating cross-examination of William Jennings Bryan remains a model of the art. While the details of at least two of these cases remain widely known, McRae adds extra value with his behind-the-scenes portrait of Darrow, relying heavily on information drawn from the lawyer’s longtime lover and confidante, Mary Field Parton. Largely through her eyes, we come to understand this legal giant, whose admirers compared him to Jesus or Socrates and whose enemies thought him the devil. A genuine humanitarian, Darrow had trouble loving individuals. Deeply insecure, he still managed a courtroom certainty and eloquence that swayed juries and, to a remarkable extent, his era.

The Prophet, The Pope and a Jack Mormon
by Sidney B. Silverman
Indie