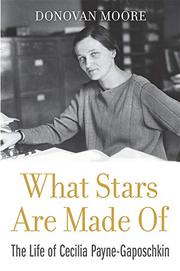 WHAT STARS ARE MADE OF

A fine biography of perhaps the greatest astronomer of the past century that no one has heard of.

Journalist Moore’s subject is Cecilia Payne-Gaposchkin (1900-1979), the eldest of three in a middle-class British family and clearly a prodigy, fascinated by natural history and science. Her father, who encouraged her pursuits, died when she was young, leaving the family short of money and with a mother of traditional, conservative views. As the author writes, she believed that “boys were to be educated, girls refined.” Despite favoring her son, she did not discourage Cecilia, who was lucky to encounter teachers who recognized her talents. Winning a scholarship, she studied physics at Cambridge until, inspired by a talk from the renowned Arthur Eddington, she changed to astronomy. She earned no degree because Cambridge did not give women degrees until 1948. Her teachers admitted that she had no future as an astronomer in Britain, so she went to Harvard to work under the charismatic Harlow Shapley, who was known for hiring women. Assigned to analyze the massive collection of photographic plates in observatory archives, Payne-Gaposchkin determined that helium was thousands of times more abundant and hydrogen millions of times more abundant in stars than on Earth. The discovery, presented in her 1925 doctoral thesis, was greeted skeptically but soon found to be correct. One scientist called it "the most brilliant thesis ever written in astronomy." Although Payne-Gaposchkin enjoyed an international reputation by the 1930s, Harvard’s catalog did not list her extremely popular classes until 1945. Appointed the first woman full professor in its faculty of arts and sciences in 1956, she became chair of the department of astronomy and died with many honors. Readers will gnash their teeth as Moore recounts the discrimination she endured. This annoyed Payne-Gaposchkin, but astronomy was her obsession, so she rarely made a fuss, and male astronomers, once they realized her brilliance, mostly treated her well.

An outstanding life of an impressive scientist.