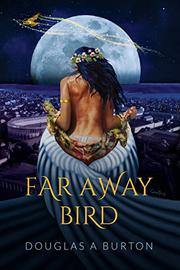 Burton’s debut historical novel, the first in a series about the Byzantine Empress Theodora, charts her journey from destitution to the throne.

The novel opens in Constantinople in the year 512. A rebellion is brewing in the city, and 14-year-old Theodora, along with her sister, Comito, is searching for their father, a bear-keeper named Acacius. The following morning, the siblings tragically discover that he has been killed in the unrest. Magister Origen, a local judge, suggests that their mother, Maximina, marry Samuel, a candidate for the bear-keeper post, in order to keep the profession in her family. Maximina agrees to this course of action, but she puts her foot down when the magistrate also recommends that both of her daughters be sent to dance school, where they’ll learn how to entertain men as actresses—and as courtesans. Despite her mother’s protests, Theodora agrees to attend the school, declaring that she wants to be “on stage for all to see. Someone beautiful and important.” Theodora goes on to fall in love with the Hippodrome and theater life in general. This idyllic existence ends, however, when Magister Origen rapes her, and one night, she slashes him with a knife and flees for home. The magistrate then withdraws financial support for the family, and soon they face dire poverty. Their savior comes in the form of a handsome Roman officer who’s later revealed to be an important figure. He asks 19-year-old Theodora to work for him as a spy to get information from various men in power, by whatever means necessary. However, she later finds that she’s falling deeply in love with her new employer.

Over the course of this novel, Burton offers an elegantly written historical tale in which he effortlessly weaves sweeping emotion and fine detail into compact sentences: “Maximina pulled her daughters in closer, forming a protective embrace. Theodora saw how the white gowns spilled down like milk upon the dark brown of the track, her mother rising above.” He also smoothly supplies accurate historical details as the story goes on, as when the aforementioned Roman officer gently corrects Theodora regarding the identity and occupation of his powerful adoptive father: “But yes, he’s Count of the Excubitors.” However, the author also sometimes offers occasional moments of physical description that can be a bit off-putting, as when he notes that “Theodora rubbed her teeth against her bottom lip.” British author Stella Duffy’s 2010 novel Theodora, which deals with the same main character, is far more brazen in its depictions of sex scenes than Burton’s is, although some readers will likely prefer the latter’s relatively genteel approach, which mostly veers away from sensationalism and focuses more on characterization. Theodora, in particular, is revealed to be a charming and strong-willed yet emotionally conflicted young woman, and she engagingly endeavors to exert her influence in a male-dominated society. The overall storyline is generally strong and compelling, and the writing is, for the most part, sharp and learned.

A well-researched rags-to-riches tale that’s told with confidence and enthusiasm.