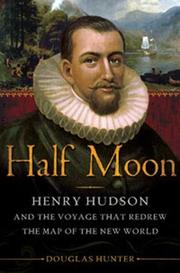 Henry Hudson and the Voyage that Redrew the Map of the New World
by Douglas Hunter
BUY NOW FROM
AMAZON
BARNES & NOBLE
LOCAL BOOKSELLER
GET WEEKLY BOOK RECOMMENDATIONS:

The author’s previous work addressed Hudson’s rivalry with French explorer Samuel de Champlain, but here the focus is on Hudson’s 1609 trip to the New World, where he and the crew of the Half Moon charted unexplored coastline from Florida to the Grand Banks off the coast of Newfoundland. Hunter provides valuable insights into the explorer’s enigmatic motivations. Why did Hudson—who was commissioned by the Dutch East India Company to find an Artic route to China—venture so far west, conducting a long, wandering sojourn into mysterious and potentially dangerous territory? It’s a mystery that has long puzzled historians, but Hunter convincingly argues that Hudson may have been more than a mere employee of the Dutch. He may have also been acting as a spy for business interests in his native England, which had claims on land that Hudson explored and mapped for the first time. Hunter ably chronicles Hudson’s daily progress on his voyage—which included conflicts with, and abductions of, Native Americans—and he skillfully establishes the global context, involving Dutch, Spanish, English and French interests. Poring over hydrographic charts and picking through often-sparse historical material, Hunter assembles a comprehensive timeline of the 400-year-old voyage, but his firm grasp of the politics and history of Hudson’s time make the book stand out.

Insightful look at Hudson, his pivotal achievement and the world events surrounding it.