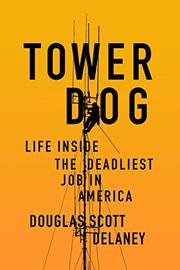 Life Inside the Deadliest Job in America
by Douglas Scott Delaney
BUY NOW FROM
AMAZON
GET WEEKLY BOOK RECOMMENDATIONS:

A memoir from a young “fourteen-dollar-an-hour cog in a thankless deadly wheel.”

For some people in this world, their routines involve drinking beer in lawn chairs set up in the parking lots of small-town hotels, then getting up to climb hundreds of feet into the air to construct and maintain the cellphone networks that the rest of us depend on. It’s dangerous work—the most dangerous job in the world, by the measure on which this narrative hinges, and one that has already taken the lives of many of the people portrayed here. In 1997, sometime screenwriter and playwright Delaney exchanged the ivory for the steel tower and made his first “tower dog” ascent into the sky over Kansas in freezing weather. “This would not be so bad,” he writes, instantly adding, “But for the next 200 feet and the next eleven hours it was very, very bad.” His fellow climbers are philosophical, if stoically resigned to the pain, discomfort, and danger of their work. They are also masterful technicians, and if nothing else, readers will learn what 4G means and how cellphone towers work. Throughout, the author plays a few writerly tricks, including protesting his writerly status (“I never called myself a writer. I never introduced myself as a writer and I was always uncomfortable when I was introduced as a writer”), but these are minor annoyances in a readable book whose larger import is in depicting a world that very few people would want to explore firsthand, somewhere between the blue-collar and the high-wire. Delaney is unfussy and workmanlike, and if he never attains the philosophical depth of, say, Matthew Crawford’s Shop Class as Soulcraft (2009), he delivers a persuasive, whole-sighted view of a highly specialized pursuit.

A vivid book guaranteed to make readers more aware of what it takes to get that cellphone signal into his or her hand, for better or worse.

THE UNWINDING
by George Packer
Nonfiction