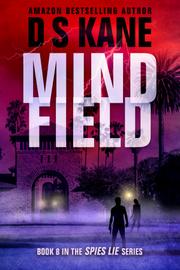 Book 8 of the Spies Lie series
by DS Kane
GET WEEKLY BOOK RECOMMENDATIONS:

In the eighth installment of Kane’s (CypherGhost, 2016, etc.) Spies Lie series, a hacker and her parents aim to uncover the truth about a CIA conspiracy.

Ann Sashakovich, an 18-year-old Stanford University student and computer hacker, is the adopted daughter of two spies in the United Nations Paramilitary Force, Cassandra Sashakovich and Lee Ainsley. Ann discovers that she has the power to access the internet mentally and turn off “Bug-Loks,” nanodevices that hackers implant in human subjects to collect information. On her first day of her sophomore year, Ann meets the handsome Glen Sarkov and quickly falls for him. He’s the CEO of Mindfield, a startup that’s designing a “nano-firewall” to prevent hacking of medical technology. When a company called InTelQ expresses interest in funding Mindfield, Glen is ecstatic, but Ann believes that he may be in danger. Meanwhile, Ann’s parents need her talents to offset a murderous plan by the CIA. The story features an engaging cast of multifaceted players, including Laura Hunter, Ann’s roommate, who has a dark secret about her mother’s death; Frank Lucessi, an arms and drug dealer; and Daniel Strumler, the newly elected U.S. president who has a reputation as “America’s dumbest presidential candidate.” The story switches between several different characters, which gives readers clear insight into each of their motivations. Ann’s crush on Glen, her frequent texts with her mom, and her focus on her schoolwork are all nice, down-to-earth additions to a high-energy thriller. In addition, Kane’s sharp prose moves the narrative along quickly and leaves no room for dull moments. In one particularly dark scene, a character reflects on murders he just committed: “As he stood up, the dead bodies stared back at him. He took a deep breath to keep their ghosts from causing him to regret what he’d done for money.” Although the mystery ties up nicely, the fates of some characters are still left unresolved, which will either leave readers feeling unsatisfied or hoping for another book in the series.

A fast-paced thriller with an empowered young female protagonist.