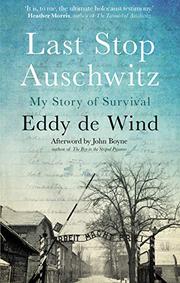 A survivor of the Holocaust chronicles his horrific experiences in the “barbed-wire hell” of Auschwitz.

A Dutch physician, de Wind was transported to Auschwitz in 1943 and was alive when the Red Army arrived in 1945. He stayed at the camp, working as a doctor for the other survivors and writing this book. It was published in the Netherlands in 1946 but nowhere else, so this is its first appearance in English. Readers who assume that victims marched directly from the trains to the gas chambers will quickly learn that many had to endure numerous other awful crimes before they were executed. Auschwitz was not one but a series of huge camps, only one of which contained the crematoriums. An estimated 1.3 million were sent there, and about 83% died. The author begins with his train ride from a Dutch camp. Prisoners were locked in an ordinary freight car with a bucket for a toilet and no food or water for a trip that lasted three days, sometimes longer. Upon arrival, all luggage and valuables were confiscated; children, the aged, and the infirm were often immediately gassed. Jews capable of working as well as non-Jews were stripped naked, shaved, sprayed with disinfectant, ordered to choose clothes from a pile taken from dead prisoners, and packed into overcrowded barracks. Most worked in mines, quarries, heavy construction, or factories, many operated by long-established Germany companies. The conditions were barbaric: The diet, which consisted of about 1,500 calories per day, according to the author, could not sustain even a sedentary person, so most died after a few months, and their skeletal bodies were burned. Auschwitz contained a few privileged institutions such as a hospital, food preparation facilities, and warehouses; prisoners assigned in these areas had a greater chance of surviving. That included the author, who delivers a harrowing account that contains the same horrors, unspeakable behavior, suffering, and occasional humanity revealed in other concentration camp memoirs.

A lamentably familiar, chilling reminder of the depths to which humans can sink.

THE MISFORTUNATES
by Dimitri Verhulst
Fiction