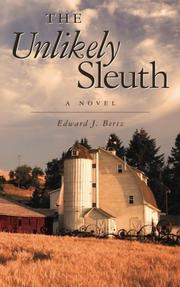 Bucky Pepin may fancy himself a Sherlock Holmes but his detecting skills are put to the test when faced with a real-life mystery in journalist Bertz’s (Becoming Michael, 2005) second novel.

Bertz’s novel opens innocently enough: a group of teenagers in the 1940s gather in a church basement for some unholy fun. There, Bucky first lays eyes on the beautiful face of Emily Labelle, a deaf girl who sends him head over heels. That same evening, Bertz’s protagonist encounters a pair of mysterious strangers: Vinnie, a fedora-topped gentleman with a nasty head wound, and his lovely girlfriend, Kate. Bucky’s haunches are raised and his suspicions prove true when he discovers the couple are on the lam after Vinnie robbed a bank. Enter Cracker, a Chicago crime boss who, along with a posse of heavily armed goons, catches wind of Vinnie and Kate’s hideout at Sugar Bush farm. Bucky musters his mettle, using all the detecting skills in his arsenal to figure out what’s at stake and who’s behind it. Each member of this artfully plotted novel’s sprawling cast has a stake in the central mystery driving the story forward. But Bertz delves deeper than just the thriller, concentrating equal attention on the complexities and family drama of his protagonist’s life. Readers are drawn in as Bucky contends with his feelings for Emily, the looming shadow of his father’s disappointment and the spiteful behavior of his ex-girlfriend Stella. At times, the compelling plotline suffers from the simplistic tone of the prose. This is particularly noticeable in scenes of criminality and violence. Furthermore, complicated themes, such as abortion and murder, are not handled with the depth and gravity they deserve. The style employed here resembles that of a young adult novel, though the book’s content may make it unsuitable for that audience.

Will resonate with readers who love expertly plotted twists and turns.

THE DOCTOR AND THE DETECTIVE
by Martin Booth
Mystery

THE BOY WHO SHOOTS CROWS
by Randall Silvis
Mystery