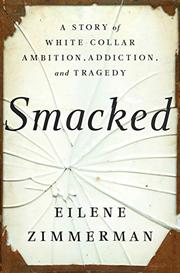 A searing account of how the author came to terms with her ex-husband’s unexpected death from a hidden drug addiction.

A few years after their divorce, New York Times contributor Zimmerman found her ex-husband, Peter, dead in his Del Mar, California, home. She knew he had been struggling for more than a year with “weight loss, chronic flu, sleepiness, ‘nodding’ (falling asleep suddenly), bruises, sores, [and] scratching.” He was also missing family get-togethers and outings with their two teenage children. A couple months before his death, Peter had told her that doctors had diagnosed him with an autoimmune disorder called Hashimoto's disease. But his autopsy told a different story: Peter had died from “some combination of infection and heart failure” brought on by “injection drug abuse.” In her candid reflections on their marriage and the months leading up to his death, Zimmerman revisits her interactions with Peter to understand how and why the man who seemed to have everything—a partnership in a respected law firm, a beautiful home, and more money than he ever dreamed possible—would succumb to cocaine and opioid addiction. As she recounts, Peter had displayed many signs of drug abuse, including forgetfulness and increased hostility, and their son had even reported seeing him unpack an Amazon box full of “cotton balls and Band Aids and needles and alcohol pads.” Yet Zimmerman had missed them all because her upper-middle-class ex-husband did not fit the stereotype of an addict. Her subsequent research into white-collar drug abuse revealed that while genetics had likely played a role in Peter’s death; so had the brutal demands of the modern working world. Many of the young professionals she interviewed reported the need to turn to performance-enhancing psycho-stimulants like Adderall and LSD to manage those demands. Intimate and disturbing, the narrative chronicles the tragic impact of drug addiction on a family and lays bare truths about a success-at-all-costs capitalist society in which many social relationships are becoming fractured.

A timely reading experience in these hectic times.