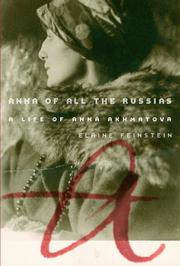 ANNA OF ALL THE RUSSIAS

The author’s previous research into the life and work of Marina Tsvetayeva, for A Captive Lion (1987), provided a natural segue into her study of Akhmatova’s long, tortured career. The poet emerges here as romantically capricious yet deeply pious, fiercely dedicated to her craft and to mentors such as Osip Mandelstam, Alexander Blok and Boris Pasternak. Akhmatova essentially refashioned herself a bohemian from aristocratic roots in Tsarskoye Selo, summer home to the tsars. She was devoted all her life to her kindly, beautiful mother. Her handsome, philandering father disapproved of poetry, so Anna Andreevna Gorenko took Akhmatova as a pen name. She believed from an early age that omens portended a remarkable destiny for her. Tall, elegant and thin, she married the wealthy poet Nikolay Gumilyov, an editor of the influential literary journal Apollon, mostly in order to flee the provinces and establish herself in pre-Revolutionary St. Petersburg. Her first volumes, Evening and Rosary, established her status at the Stray Dog Café, a legendary Petersburg hangout for intellectuals and artists. A dizzying number of dire affairs ensued, as well as two more damaging marriages. It all served as fuel for Akhmatova’s creative fire, though the wild euphoria of revolution was followed by the embittering disillusionment of civil war and famine. Always in frail health, she refused to go into exile even as numerous friends, longtime lover and art critic Nikolay Punin and her sadly neglected son Lev Gumilyov were imprisoned, tortured and worse. Her work was disparaged as too decadent, too religious and too sentimental, but she endured, surviving the revolution and Soviet terror to secure a triumphant legacy. Feinstein’s magisterial translations of Akhmatova’s poetry further enrich this portrait of a mythic personality as vulnerable as she was implacable.

A window to a dazzling lost age.

LAWRENCE AND THE WOMEN
by Elaine Feinstein