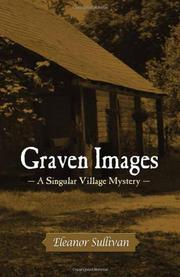 Sullivan’s (Cover Her Body, 2011) latest mystery follows a 19th-century midwife and herbalist as she attempts to solve a murder—and save an innocent man.

The town of Zoar, Ohio, appears to be an idyllic, if strict, community, settled by German dissidents seeking religious freedom. The Separatists pride themselves on simple, communal living, in which all work and profits are shared, but, like most seemingly perfect towns, tensions lurk beneath the surface. The inhabitants struggle to live piously while also retaining some independence by, for example, questioning their rigid leadership. Adelaide, a young, headstrong healer, is conflicted about this prescribed way of life—and especially about the Separatists’ distrust of the outside world. After a vagabond artist, barely tolerated by Zoar’s residents, turns up dead, Adelaide questions the townspeople’s circumstantial indictment of a traveling Irishman; they plan to turn him over to American authorities, who will almost certainly sentence him to death. Determined to solve the artist’s murder and clear the Irishman’s name, Adelaide becomes convinced that a fellow Separatist is responsible for the crime. Adelaide pushes the town’s leader to investigate—an act considered inappropriate by many of the other residents; women, despite the community’s official policy of equality, are clearly subservient citizens. Adelaide’s progressive attitude makes her an effective protagonist, and the story effectively shows the autonomy granted to midwives in 1830s America. For example, Adelaide travels outside of Zoar to attend to birthing women, and Zoar’s males often defer to her directives based on her medical expertise, even when it goes against their wishes. (This comes in handy when she refuses to allow the accused Irishman to be sent away while still in need of medical care.) Sullivan, a real-life descendent of Zoar’s founders, spends as much time on Adelaide’s and the other characters’ daily lives as she does on the plot, and this focus can feel a bit overdone at times, as can the occasional dips into old-fashioned language. That said, Sullivan generally delivers well-structured prose and strong dialogue, and her detailed overview of settler life—and the surprising independence of the town’s female population—makes for an enjoyable read.

AFTER THE STORM
by Linda Castillo
Indie