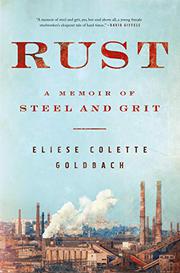 Ohioan Goldbach turns in a gritty memoir of working in a steel mill while wrestling with the world beyond.

“Steel is the only thing that shines in the belly of the mill.” The rest, writes the author, is hued in the greens and browns of dust and decay, muted and camouflaged. Appropriately, at the plant, she was just this side of anonymous, known as “#6691: Utility Worker.” Still, she was assured by fellow workers that the money she would make would be the envy of Cleveland, certainly more than what she’d make as the professor she wanted to become. Of course, there were plenty of drawbacks. Her first day, she heard the horrific tale of another woman on the line torn to bits—“her body just fell apart”—by an errant cylinder on a conveyor belt. There were also dangerous forklifts and cauldrons and vats of magmatic metal. The world outside was full of terrors, as well. Goldbach endured sexual assault and the onset of bipolar disorder and battled her parents on matters of religion and politics. As a solid member of the blue-collar working class, union card in hand, she took a role as the resident liberal in the steel mill, a type so rare that her fellow workers seemed scarcely able to imagine it. Trumpian currents run deep in the mill, as she discovered, but when tragedy strikes, she learns, these “bunch of Joe Schmos” are as one: “There was no division so great that it could eclipse the unity that had been forged in the light of the mill’s orange flame.” The narrative sags every now and then, but one cheers for Goldbach when she’s finally offered the teaching post to which she’s so long aspired, entailing a massive pay cut and starting all over at the bottom, prepared to take that risk precisely because she has gained the necessary confidence on the shop floor—and saved enough to do so thanks to the decent, union-backed wages she earned.