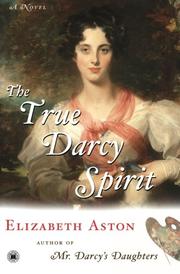 For Jane Austen lovers, this latest take on the Darcy clan offers an amusing addition to the literature of Regency London’s mores.

Aston’s previous Darcy novels (The Exploits and Adventures of Miss Alathea Darcy, not reviewed, etc.) concern the former Miss Bennett and Mr. Darcy’s five daughters—this story takes on the exploits of a few cousins. At 19, Cassandra Darcy is in possession of rare beauty, a fine fortune and a very un-ladylike talent for painting. And though she has all she could ask for, she is under the thumb of her pious stepfather, Mr. Partington. Cassandra’s future is thrown into doubt, though, when Henry Lisser, a German landscape painter brought in to paint the family estate, begins a flirtation with naughty cousin Belle. Everyone believes it was Cassandra kissing Lisser behind the bushes, and to save Belle’s already shaky reputation, Cassandra agrees to go to Bath to reflect on her wickedness. While there, she falls in love with James Eyre, and the two run away to London. But when James halts the marriage plans to negotiate a rich dowry (and too late, passionate Cassandra has already slept with him!), she spurns James, and in turn becomes a social pariah. Enter dashing cousin Horatio Darcy, a lawyer representing her stepfather, to offer Cassandra two choices: Repair to the country and live a life of spinsterhood with the vile Mrs. Harris, or become destitute. Cassandra chooses to make her way in London as a portraitist, but during her first day of freedom makes a monumental error in judgment—she takes rooms with a procuress who intends to turn Cassandra into Lord Usborne’s mistress. Cassandra escapes life in the demimonde with the help of her cousin Camilla, who, with the help of kind Mr. Lisser, sets Cassandra up with her own painting studio. Austenites may balk at this racy, wholly 21st-century reinvention of Austen (Lord Frederick has an eye for men, our teen heroine is no virgin and Aston’s feminist motifs are a bit heavy handed), but all in all, much enjoyment can be had from Cassandra’s attempts to find love and artistic happiness.

Light historical romance with the benefit of a sterling pedigree.

THE PASSIONS OF DR. DARCY
by Sharon Lathan
Newsletter sign-up