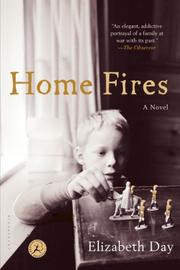 A beautifully crafted novel of love, loss and self-forgiveness.

Caroline and Andrew Weston have recently lost their only son, Max, a corporal who died in an explosion while serving with the British Army in South Sudan. Caroline is shattered, and her deep grief drives a wedge between her and her husband. And as if that weren’t trauma enough, Andrew has decided that his aging mother, Elsa, should come and live with them since she can no longer cope with being on her own. Caroline and Elsa have never gotten along, and Caroline, even at the age of 52, is still made to feel socially inferior by her imperious mother-in-law. Caroline develops an unhealthy obsession as a way of dealing with her loss, spending hours on the computer researching body armor, convinced that inadequate protection may have been the reason for Max’s death. She winds up getting an appointment with the Armed Services Minister, who explains to her that while Max had access to newer equipment, for whatever reason, he chose to wear his old armor, and this made him more vulnerable. Even this Caroline cannot understand, and she accuses the minister of lying. On the way out of the office, she collapses by a cenotaph honoring “The Glorious Dead,” and this turns out to be the turning point toward an acceptance of Max’s death. Andrew, of course, has been experiencing the same loss, though he copes with it in a much different, though no less destructive way. Meanwhile, Elsa’s presence in the household exacerbates the tension.

Day moves the reader poignantly through different perspectives on personal suffering and heartbreak.

THE PARTY
by Elizabeth Day
Fiction

THE GRIEF OF OTHERS
by Leah Hager Cohen
Nonfiction