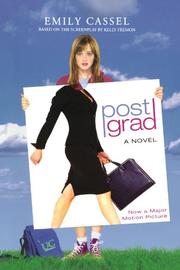 A recently minted college graduate learns she can’t always get what she wants.

“Based on the screenplay by Kelly Fremon” (the cover avers) for the upcoming romantic comedy of the same title, this is less a novelization than a first-person adaptation. Cassel succeeds at getting into the head of her naïve main character, only to find that there’s not much substance there. Narrator Ryden Malby launches her autobiographical sketch with her graduation from a generic California college. Her degree is all part of an overarching life scheme. “I devised the plan years ago,” she confides. “It was called, very cleverly, ‘the Plan,’ and it was pretty straightforward.” After distinguishing herself academically in high school and college, Ryan plans to land a job in her first week out of school at a major Los Angeles publishing house; marry the literary wunderkind she admires; and stay close to best friend Adam Davies, a guitar-playing slacker whose affection remains unrequited. As they tend to do in these things, Ryden’s big plans go awry. Her primo job is stolen by her fiercest college competitor, and she’s ejected from her swanky new apartment. Soon she’s living at home while struggling to find a job she deems worthy. Insert a montage of disastrous interviews; a quirky family whose standouts include Ryden’s belt buckle–shilling father and her no-nonsense grandmother; and David, a cliché-ridden hot Brazilian neighbor shipped in from central casting. “I mean, really, they smoldered, like little black fires,” says Ryden of hunky dory’s eyes.

A mishmash of The Devil Wears Prada, Sex and the City and various coming-of-age flicks, the novel works fine as a light beach read, but is no more demanding than an afternoon at the movies.

THE ROCK STAR IN SEAT 3A
by Jill Kargman
Fiction

EXCUSE ME FOR LIVING
by Ric Klass
Indie