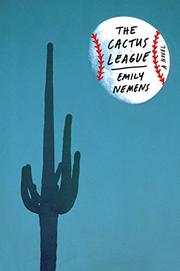 A star left fielder for the Los Angeles Lions is in personal and professional free fall in this debut novel from the editor of the Paris Review.

Jason Goodyear is a major league star: He's got a Golden Glove, solid MVP votes, and a big deal with Nike. So why is he suffering through a divorce, damaging historical property, and losing prominent endorsements? That's the question an unnamed sportswriter, the casualty of an agonizing round of newspaper layoffs, sets out to answer. Instead of going straight to the source, however, he tracks the movements of everyone adjacent to Goodyear during the 2011 spring training season in Scottsdale, Arizona. There's Tamara Rowland, a down-on-her-luck divorcée who enjoys picking up ball players for a casual fling; Stephen Smith, a partial owner of the Lions and the only black man who has any power in the franchise; William Goslin, a rookie first baseman who is flattered into helping Goodyear get out of trouble; and even a chorus of "baseball wives" who know that spring training "is a party: luncheons and spa days, cocktails and color consultations, mornings at the furrier's and afternoons with the jeweler." What emerges, however, is less a picture of Goodyear during a moment of personal crisis than a portrait of Scottsdale and its residents as they recover from the 2008 recession. The sportswriter intersperses each chapter-length character study with his own digressive musings about everything from Goodyear's motivations to belabored geological metaphors for the draft. Unfortunately, this frame narrative for Nemens' ambitious, sprawling, and otherwise impeccably written debut is an often clunky and frustrating misdirection. Although the sportswriter insists readers can understand Goodyear's inner workings by examining peers, colleagues, and characters on the periphery, he never bothers to tell us how these character studies shed light on the star player. As it turns out, Goodyear isn't really at the heart of this book at all. He's a premise rather than a true-blue character. It's a strange choice on the part of Nemens, who created a narrator uniquely situated to deliver on his initial promises—or subvert them openly and purposefully. Nemens has instead written a novel about baseball and how it shapes the lives of athletes as much as the town that supports it—and a beautiful one at that. As our narrator would put it: "It's more, He did this, he said that, and then the whole world unfurled." It simply would have been nice to know that that was the only game we were playing.

Like the best sportswriting, this bighearted, finely observed novel is about far more than the game.