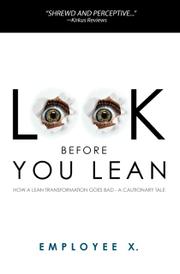 LOOK BEFORE YOU LEAN

Employee X sets the stage for his critique with a chapter called “Voice from the Factory Floor” and an epigraph, taken from The Beatles’ “Strawberry Fields,” about the ease of living in a state of intentional ignorance and misunderstanding. He applies that mindset to those involved with lean—a business methodology based on methods developed at Toyota Production System, a Toyota factory—which, quoting a consultancy group, X describes as a method that “enables a process or business to realize its true performance potential through the fundamental use and application of various tools to see waste and eliminate waste.” For two decades, lean has been making headway in business circles, but X calls into question that direction for a variety of reasons. First, he references its supposed company dropout rate of “more than 90%.” X assesses the chances that his company will complete the implementation at less than 50%—though he later says that the implementation has been indefinitely suspended—and states that his aim, in addition to providing feedback to the lean community, is to warn others who may be considering the move. Each of the following nine chapters uses a quotation from a famous children’s story or movie—“Hansel and Gretel,” The Wizard of Oz, Cinderella (the Disney movie), “Jack and the Beanstalk,” etc.—to criticize the slated five-year implementation of lean at his company, which he refers to as Woodcutter Enterprises, by consultants, whom he refers to as Witches and Tyrants Federated. The childish nicknames and acronyms undercut the authority of the commentary, even though some of his criticisms—such as employees referring to lean using words such as “cult,” “brainwashing,” and “Gestapo tactics”—are damning. Nonetheless, his admissions that he doesn’t have all the facts and has not had access to all “relevant materials” or attended all meetings make him appear to be aboveboard and honest about his level of knowledge and involvement.

Shrewd and perceptive, though the leap from describing a poor implementation of lean to an out-and-out condemnation of it may not be justified.

THE ART OF BEING UNREASONABLE
by Eli Broad
Indie