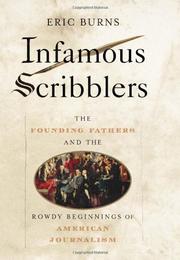 The Founding Fathers and the Rowdy Beginnings of American Journalism
by Eric Burns
BUY NOW FROM
AMAZON
BARNES & NOBLE
GET WEEKLY BOOK RECOMMENDATIONS:

From Boston’s first four-page News-Letter (1690) to the death of George Washington (1799): a quick, illuminating history of the rise of American journalism.

It began in primordial slime—and stayed pretty slimy for its first century, writes Burns (The Spirits of America, 2003, etc.), host of Fox News-Watch. Anyone who has ever read American newspapers from the colonial and Revolutionary periods knows they were not at all fair and balanced. They were never intended to be, the author declares; they were proudly, patently partisan and often deeply vituperative and mendacious. Burns begins in Boston, where America’s first papers were born, then moves to Philadelphia with Benjamin Franklin (whose family—no surprise—is prominent in the story, as are members of the Adams clan). The author summarizes the 1735 libel trial of John Peter Zenger and examines the role of the press before and during the Revolutionary War. He introduces significant, though not necessarily admirable, journalists like James Rivington, John Fenno, James Thomson Callendar, Benjamin Franklin Bache (Ben’s grandson) and William Cobbett. He describes poet Philip Freneau’s editorship of the National Gazette and limns the reactions of George Washington, Thomas Jefferson, Alexander Hamilton and other Founding Fathers to the often vicious portrayals of them in the press. (Callendar was the first to print the rumors about Jefferson and Sally Hemings.) Burns also examines the sobering effects of the 1798 Sedition Act, which suppressed editorial criticism of the U.S. president. Unfortunately, his narration and exposition are not always equal to his subject. The author uses too many tertiary quotes and often fails to provide textual attribution, so that readers must go to the endnotes to identify the source of a contemporary comment. He also has an annoying habit of quoting rather than paraphrasing scholars, as if he were a student fearful that his fastidious professor might allege plagiarism.

SOMEONE TO WATCH OVER ME
by Eric Burns
Nonfiction

THE JOY OF BOOKS
by Eric Burns
Nonfiction

THE WATCHDOG THAT DIDN'T BARK
by Dean Starkman
Newsletter sign-up