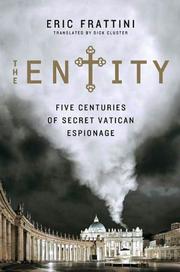 Dense, exhaustive account of espionage and intrigue directed by and against the Vatican, from 1566 to the present.

Madrid-based TV correspondent Frattini, who has published several Spanish-language nonfiction titles, presents a dizzying history that would have been more effective on a smaller scale. As written, this hectic, whirlwind account races through five centuries and a seemingly endless list of names, dates and characters without allowing the many dramatic vignettes to fully take hold. Astonishing tales abound along the way, starting with the creation of the Vatican’s spy service, originally called the Holy Alliance, by Pope Pius V, who wanted to overthrow England’s Protestant Queen Elizabeth I and place Catholic Mary Stuart on her throne. The author claims that the Holy Alliance later spawned its own counterespionage wing and a “hit squad” that assassinated numerous perceived enemies of the Church. Not all of these assertions are convincing, or well documented—Frattini routinely cites rumors and speculation as plausible facts—but they certainly make for curious reading. The author finds the hand of Vatican spies throughout the royal courts of Europe, the war rooms of major combatants in both world wars, the boardrooms of corrupt money-laundering bankers and the halls of spy services from the CIA to Mossad. According to Frattini, Vatican agents have done everything from helping Nazi war criminals flee to South America after World War II to thwarting the assassination of Golda Meir by terrorists in 1973. In one anecdote, he recounts how the Holy Alliance stymied a plot in 1881 to steal the remains of Pope Pius IX. Indeed, for all the intrigue allegedly perpetrated by the Vatican, Frattini notes that the Pope was equally the target of espionage. For centuries, the halls of the Vatican were rife with spies, especially during times of war, when the Vatican’s neutrality, or lack thereof, was of major concern to belligerents.

A colorful history, but overly ambitious, often disorienting and not entirely convincing.

A CORNER OF THE WORLD
by Mylene Fernández-Pintado
Fiction

OBLIGATIONS OF THE BONE
by Dick Cluster
Newsletter sign-up