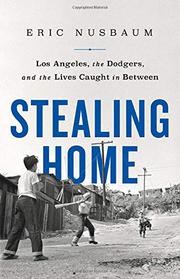 Los Angeles, the Dodgers, and the Lives Caught in Between
by Eric Nusbaum
BUY NOW FROM
AMAZON
BARNES & NOBLE
LOCAL BOOKSELLER
GET WEEKLY BOOK RECOMMENDATIONS:

A well-known tale of racial injustice given a fresh look by sportswriter Nusbaum.

The construction of Dodger Stadium is an epic well known in the history of Southern California. The author digs deep to find stories from the canyon where the stadium was built, a place made by Mexican and Mexican American families who were covenanted out of other neighborhoods in Los Angeles. The early residents could climb the hill above the canyon and see the skyline of a growing metropolis whose new City Hall appeared “like an arrow pointing upwards to the infinite possibilities of Southern California—or perhaps like a giant middle finger aimed directly at [them].” When the 101, a multilane major highway, was built, the isolation was complete—until, when the Brooklyn Dodgers moved across the country, the three neighborhoods of Chavez Ravine were deemed an ideal spot for a stadium. Nusbaum charts the course of what happened next, as neighbors banded together and activists set about agitating for their rights, all to no avail, and with jail sentences for some. One aspect of the story is that, a decade before the Dodgers arrived, the area was slated for modernist public housing, but the project was shelved in a Cold War era in which such utopian enterprises smacked of communism. Instead, capitalism won out: Deeds were bought and sold, properties condemned, construction companies and developers enriched. A nice twist, as Nusbaum writes toward the end of his illuminating narrative, is that barely anything seemed to go right as the stadium was going up. With the passage of time, the communities of Palo Verde, La Loma, and Bishop faded from memory. “Baseball may have mystical powers, but it cannot erase the past,” writes the author near the end. “It cannot redeem us.” That’s just right, and Nusbaum does good work by reminding readers of what was lost in the name of municipal bragging rights.