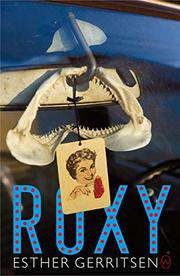 Sudden catastrophe brings bewilderment and wild swerves of direction to a troubled and troubling young widow.

Roxy Rombouts, 30 years younger than her film-producer husband, Arthur, immediately assumes the worst when she finds two policemen on her doorstep in the middle of the night, and she’s right to do so. Not only has Arthur been killed in a car accident, but so has his young female intern, and both were naked, parked on the hard shoulder. “Would the bodies be carefully separated at the site of an accident like that, or might parts of one still be in the other?” wonders Roxy, in the deadpan comic style characteristic of Dutch novelist Gerritsen (Craving, 2018, etc). Mother to 3-year-old Louise, Roxy found early fame as the author of an autobiographical novel, The Trucker’s Daughter, but moving in with Arthur when she was only 17, she “has always known that she skipped something, took a short cut to adulthood.” Now this introverted woman finds her life busily populated by babysitter Liza; Jane, Arthur’s personal assistant; and her previously estranged parents, who move in for a while. The widow also finds herself sleeping with her married undertaker, Marcel, and, later—when the women and Louise head away for a holiday—with strangers met in hotel bars. On this trip, Roxy’s care of Louise swings through indulgence, neglect, anger, and endangerment as she confronts her fears of the past and the future. Questionable parenting and bizarre behavior are hallmarks of Gerritsen’s previous novel, too, but Roxy’s story is starker and more manic, as her road trip of self-discovery spirals down into ever darker, more violent behavior before emerging into a degree of realization.