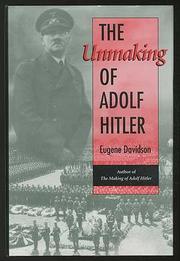 THE UNMAKING OF ADOLF HITLER

 A valuable contribution to the ever-growing library on Hitler and National Socialism. Davidson, president emeritus of the Conference on European History and a former president of the Foundation for Foreign Affairs, picks up where his previous work, The Making of Adolf Hitler (1977), left off. From Hitler's first moves hours after being sworn in as chancellor on January 30, 1933, until the final GîtterdÑmmerung in the Berlin bunker, Davidson presents a clearly written and cohesive narrative. The focus here is mostly on political and diplomatic history, and some may lament the absence of information on economic and social conditions under the Third Reich. The title is somewhat misleading, since almost 400 pages are devoted to Hitler's unbroken string of successes, from the moment when he gained power until the tide of war finally began to turn against the Germans. In fact, the reader might be astounded by the combination of skill and luck that accompanied Hitler both before and during the war. It was only after the failure to subdue England, when Hitler turned his armies toward the Soviet Union, that his fortunes began to decline. Davidson's study of diplomacy in the 1930s persuasively demonstrates that French and British politicians and diplomats were totally at a loss when dealing with Hitler. Curiously, there is little discussion concerning anti- Semitism, racism, or the Holocaust; since it has been argued that these ideas and events represent the very heart of the Nazi ideology, this is a serious shortcoming, even if the work is concerned primarily with diplomatic and political history, for what is more ``political'' than genocide? A student unfamiliar with the past might conclude that euthanasia, political terror, the glorification of war, and the Holocaust were merely sidelines to the story. Most of what is here is not new, yet it is presented in a manner that will benefit specialists; for students and others, the book offers only one facet of the larger picture. (50 illustrations, not seen.)