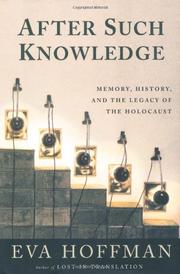 Memory, History, and the Aftermath of the Holocaust
by Eva Hoffman
BUY NOW FROM
AMAZON
BARNES & NOBLE
GET WEEKLY BOOK RECOMMENDATIONS:

Literate if sometimes arid essays on the world—intellectual, cultural, and emotional—of the Holocaust’s “second generation.”

Memoirist Hoffman (Shtetl, 1997, etc.), a representative of that generation, writes, “I was the designated carrier for the cargo of awesome knowledge transferred to me by my parents, and its burden had to be transported carefully, with all the iterated accounts literally intact.” Literally intact: to tinker with the narrative of the survivors, she writes, in order to streamline, even to make more comprehensible, would have been “to make indecently rational what had been obscenely irrational. It would have been to normalize through familiar form an utterly aberrant content.” It is a terrible responsibility, this burden of keeping alive and unbowdlerized the murder of so many millions; it inserts the realities of the first generation into the lives of the second, such that, she writes, “the facts seemed to be such an inescapable part of my inner world as to belong to me, to my own experience. But of course they didn’t; and in that elision, that caesura, much of the post-generation’s problematic can be found.” The problematic is real, writes Hoffman: it is all to easy for the second generation, laden with the “emotional sequelae of our elders’ experiences,” to feel that it has no history of its own, that “we are secondary not only chronologically but, so to speak, ontologically.” But the burden is necessary, Hoffman suggests, if only as a means of bearing living memory into history and into “our consciousness of the world” in a time when many—whether children and grandchildren of the second generation or a new generation of Germans—look, perhaps understandably, to forget about the past and move on.

A commendable contribution—but no match for Melvin Bukiet’s superb second-generation anthology Nothing Makes You Free (2002).

THE SECRET
by Eva Hoffman
Nonfiction