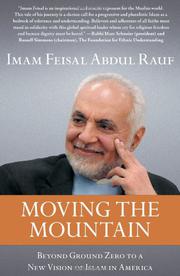 A leading American imam urgently calls for reconciliation and understanding between Islam and other faiths.

Rauf has served as imam of the al-Farah Mosque in New York City since 1983. He is deeply involved in multifaith work with the Cordoba Initiative and very much in demand as a teacher on the finer points of Islam since 9/11 (What Is Right with Islam, 2005, etc.). He believes that all Muslims (and especially women) must reclaim Islam from the extremists around the world—Islamists and “radical jihadists”—who have co-opted the Prophet’s message and corrupted its benevolent intent. Events such as the 1979 Iranian Revolution, the rise of the Taliban in Afghanistan, Samuel Huntington’s “clash of civilizations” argument in the mid-1990s that Islam “was the new enemy of the West” and, most significantly, the 9/11 terrorist attacks all helped demonize Muslims in the eyes of the rest of the country, obscuring what Rauf believes is shared by people of all faiths. He offers a knowledgeable comparative study of the “People of the Book,” focusing partly on the similarities between the three Abrahamic faiths: The first two commandments shared by all three exhort the believer to bear witness to the oneness of God and to treat others as you treat yourself, establishing the Golden Rule of Judaism, Christianity and Islam. Rauf delves into the “bogeyman” of Shariah law, comparing it to the U.S. Constitution, which indeed has evolved as the world has changed and should not be viewed as static and literal. Unfortunately, writes the author, Islam has been deemed an anti-women religion, by culture and practice, when in fact the Prophet himself instituted revolutionary changes in the status of women, and his first wife, Khadijah, was a protofeminist. President Obama’s assertion in his 2011 State of the Union address that “American Muslims are part of our American family” gave Rauf new cause for hope that the hysteria around Islam has at last “bottomed out” and rapprochement can now occur.

A spirited, accessible defense for all believers.

THE QUR’AN
by Bruce Lawrence
Nonfiction

A BATTLE FOR THE SOUL OF ISLAM
by M. Zuhdi Jasser
Indie

THE HEIRS OF MUHAMMAD
by Barnaby Rogerson
Nonfiction