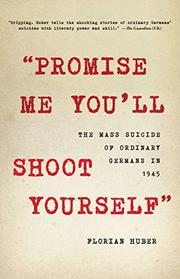 "PROMISE ME YOU'LL SHOOT YOURSELF"

A sobering study of the collapse of the Third Reich and the wave of suicides that accompanied its fall.

Hitler famously shot himself rather than fall into the hands of the Red Army, and many of his closest associates—e.g., Joseph Goebbels and his entire family—followed suit. So, too, writes German historian and documentary filmmaker Huber, did countless “ordinary” Germans, whether out of simple despair or certainty that the crimes of the Nazi regime would be laid at their door. The wave of suicide began earlier than 1945; the author quotes a schoolteacher who wrote after the German defeat at Stalingrad in 1943, “the first and last cause of my despair is the hopelessness of victory.” Still, beginning in the spring of 1945, as Huber grimly documents, “large quantities of cyanide and prussic acid were circulating in Germany, in response to an explosion in demand.” The Nazi regime began to suppress the statistics related to suicide lest they prompt even more destruction. Drawing on existing records, Huber reckons that in Berlin alone, the suicide rate was five times higher than “normal” in April 1945, when the city fell. The victorious Allies were surprised to find among civilian survivors a kind of orderliness and calm—though, as the author notes, many soldiers who had lived through combat were more inclined to withdraw into themselves, none quite “ready for reality.” The subtitle of the book is a touch too narrow. The author not only covers suicides, but also those who defiantly refused either to kill themselves or to acknowledge any wrongdoing, such as a Nazi official who disputed the right of a German court to judge her actions in wartime, seeing them “as henchmen of the occupying powers, accusing her not of any crime, but of fighting for a political ideal.” Such repudiation joined with a widespread sense of victimhood that “freed the Germans from the need to examine their own consciences.”

An illuminating examination of a little-known aspect of World War II.

BESIDE MYSELF
by Sasha Marianna Salzmann
Fiction

LOOK AT ME
by Mareike Krügel
Fiction

THE TRUTH AND OTHER LIES
by Sascha Arango
Newsletter sign-up