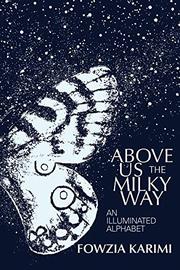 ABOVE US THE MILKY WAY

A semiautobiographical debut by author/illustrator Karimi offers the illuminated fragments of one family’s memories as they emigrate from Afghanistan to the United States.

“In the beginning,” Karimi states in the early pages of this saturated, elliptical novel, “the taking and the killing was not particular, not honed. They took those who did not look right, who walked askew, who spoke the wrong words in the wrong place to the wrong individual….Later, they had names, they had addresses.” It is 1980, and the Soviet army has invaded Afghanistan, ushering in an era of paranoia, reprisal, state-sponsored torture, and bloodshed. A man has been denounced by a colleague, or perhaps total stranger, forced to recite a list of "fellow collaborators" on live television. The patriarch of the family at the center of this book’s spiral constellation of memories, fables, illustrations, and evidence is on the list. Facing almost certain detention, and probable death, the father, mother, and five daughters flee the country, knowing they will likely never see either their homeland or their beloved extended family again. In America, the five sisters form a new life—one demarcated by before and after—as their father and mother find new work, new friendships, new lives, and new ways of defining themselves both as victims and survivors. Meanwhile, the gruesome harvest of war continues, shivering along the connecting cords of cultural and personal memory to touch every part of the sisters’ world. Structured as an illuminated alphabet, Karimi’s startling debut pieces together a pastiche of memory, folklore, and multilayered sense impressions with photographs from Karimi’s childhood and illustrations of her own making. The result is a sharply etched treatise on the objects of memory—encouraging a perhaps unavoidable comparison to Proust—which sets itself the monumental task of exploring the atrocity of war both as the bombs strike and as they reverberate down through the generations. Because, as Karimi concludes, a “war in one place is like a wound in all,” and what else but the letters of an alphabet, or perhaps sisters, could, “give positive form to the formless” by being “forever in two places at once: bound to their fixed positions—for who could reorder the sequence of an alphabet?—and leaving their posts to form this…word.”

A novel powerful in both its beauty and its uncompromising horror whose themes are as sadly timely as they are eternal.

A GAME FOR SWALLOWS
by Zeina Abirached
Nonfiction