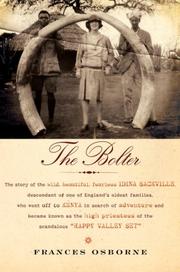 Sordid tales of aspiration and debauchery among the minor aristocracy of Britain.

Osborne (Lilla’s Feast: A Story of Food, Love, and War in the Orient, 2004) doesn’t mean to malign her great-grandmother, the perpetrator of much bad behavior and the protagonist of this book. Indeed, by her account Idina Sackville earns points for not being a “husband stealer” and for being what one friend called “preposterously—and secretly—kind.” Yet Idina, daughter of the philandering Earl De La Warr, took up with odd company early on. Her parents were unintended role models. Idina’s mother, writes Osborne, married the earl to gain a title, and the earl, known as “Naughty Gilbert,” married Idina’s mother for her money. Eventually, Idina married rich, too—one of the richest men in Britain, in fact, “rich enough for his social ambitions to withstand marrying a girl from a scandalous family.” She spent months designing a Xanadu featuring a “rabbit warren of dozens of nursery bedrooms and servants’ rooms,” but, alas, never got to see the pleasure dome completed, since the marriage turned out to be loveless and lost. Idina moved on, as she would four more times, ending up in British East Africa, where she made a hearty game of spouse-swapping and wound up figuring in stories that, among other things, would yield the aptly titled 1987 film White Mischief, as well as Nancy Mitford’s The Pursuit of Love (1945) and other period books—to say nothing of plenty of tabloid tales. Osborne, who writes pleasantly and carefully, hints that Idina was a pioneering feminist, but this portrait makes her appear to be self-absorbed and sad, living out a boozy, wandering and generally feckless life.

Of interest to royal-watchers and certain strains of anglophiles, perhaps, but a sansculotte may wonder what the point is.