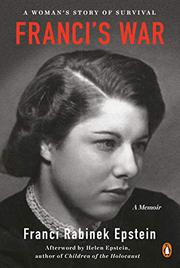 A Holocaust memoir by a secular Czechoslovakian Jew who was 22 when she was rounded up with her family to be deported to Terezín in 1942—only the first step of her wartime misery.

Epstein (1920-1989) wrote this brief, striking memoir in the mid-1970s, largely for the benefit of her children. Her daughter, Helen Epstein (The Long Half-Lives of Love and Trauma, 2017, etc.), a writer who struggled her entire life to grasp her mother’s awful wartime experiences and her own trauma as the child of Holocaust survivors, could not face returning to it until recently. Here, she does a fine job of clarifying some of the detail and characters. A youthful zest for life comes through despite “Franci’s” many travails. She demonstrates a fierce determination to adapt and prevail amid the harshest conditions. First, she watched as her parents, middle-class members of the German-speaking community in Prague, were brutally separated from her at Terezín to be sent to the Nazi death camps. Life in the barracks of Terezín was fraught but bearable, and Franci keenly observes the hierarchy of survival, where the well-connected enjoyed benefits not available to all, and “a whole new standard of behavior evolved, much of it self-sacrificing and noble, but also frequently selfish and amoral.” Married hastily to a young man from home who was able to help them survive by his canny trading instincts, until he was caught and disappeared, Franci was herded into the cattle cars for transport to Auschwitz in May 1944. There, her cousin made her aware of what was burning in the chimneys; she “became conscious of a peculiar odor in the air, like burning hair or bones.” From then on, the author refers to herself by her camp tattoo number, A-4116, and she chronicles how she endured the brutal conditions and disease at several women’s camps by using her sewing and electrical skills.