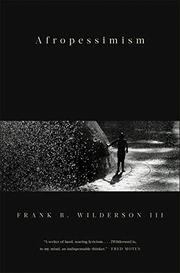 A compelling, profoundly unsettling blend of memoir and manifesto that proposes that—by design—matters will never improve for African Americans.

To be black, writes Wilderson III, who chairs the African American Studies program at the University of California, Irvine, is not just likely to descend from slaves, but to be forever condemned to the existential condition of a slave. As he writes, “slavery did not end in 1865. It is a relational dynamic…[that] can continue to exist once the settler has left or ceded governmental power.” No other ethnic group—not Native Americans, Asian Americans, Arab Americans, or Hispanic Americans—in the U.S. suffers the same institutional violence, and, Wilderson suggests, all others are more structurally aligned with the white oppressor than with the oppressed African American in a system that hinges on violence. Blending affecting memoir that touches on such matters as mental illness, alienation, exile, and a transcendent maternal love with brittle condemnation of a condition of unfreedom and relentless othering, the author delivers a difficult but necessary argument. It is difficult because it demands that readers of any ethnicity confront hard truths and also because it is densely written, with thickets of postmodern tropes to work through (“blackness is a locus of abjection to be instrumentalized on a whim…a disfigured and disfiguring phobic phenomenon”). The book is deeply pessimistic indeed, as Wilderson rejects any possibility of racial reconciliation in these two-steps-backward times. Perhaps the greatest value of the book is in its posing of questions that may seem rhetorical but in fact probe at interethnic conflicts that are hundreds, even thousands of years old. Wilderson advances a growing body of theory that must be reckoned with and that “has secured a mandate from Black people at their best; which is to say, a mandate to speak the analysis and rage that most Black people are free only to whisper.”

An essential contribution to any discussion of race and likely to be a standard text in cultural studies for years to come.