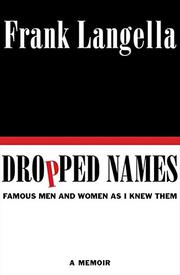 Famous Men and Women As I Knew Them
by Frank Langella
BUY NOW FROM
AMAZON
BARNES & NOBLE
LOCAL BOOKSELLER
GET WEEKLY BOOK RECOMMENDATIONS:

Stage and screen stalwart Langella recalls his encounters with celebrity, both in and out of the spotlight.

Early on in this engaging memoir, the author notes his difficulty in conveying the “glory” of a chapter’s subject, Noel Coward, to a contemporary audience, “as wit, intelligence, and style have lost ground to stupid, vulgar, and loud.” Curmudgeonly tone aside, Langella’s stories of 65 noteworthy people illustrate his point that the celebrities of today can’t hold a candle to the distant, mysterious, shining lights of yesteryear. The book is organized into a separate chapter for each “dropped name,” in chronological order of their death. Among those appearing, some in brief encounters, others in lifelong relationships, are many of film and theater’s greatest, including Laurence Olivier, Robert Mitchum, Elizabeth Taylor and Rita Hayworth, to name just a few. Freed up, perhaps, to kiss and tell by the death of his subjects, Langella pulls no punches, expressing scorn for talent wasted (Richard Burton) and egotism misplaced (Anthony Quinn, Actors Studio guru Lee Strasberg), and providing scandalous detail on many on-set or backstage dalliances. Some of the stories are humorous, others fascinating, and some—notably the section on Hayworth—heartbreaking. Though often relegated to a supporting role in these stories, Langella’s voice commands the reader’s attention. However, he does not ignore his own flaws, including moments when his arrogance let him down or his ignorance led to humiliation. Through it all, the author’s respect for the craft of acting and those who attempt to practice it at the highest level is evident, and his focus on the importance of real connection between not just actor and audience but between human beings, elevates the book above mere name-dropping.

Not just Langella’s “famous people I have known,” but a heartfelt love letter to the theater and to the days when stars were stars, not merely celebrities.

THE MAGIC OF THEATER
by David Black
Nonfiction

THE GOOD, THE BAD, AND ME
by Eli Wallach
Newsletter sign-up