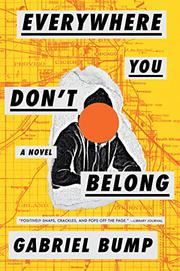 Bump tells the story of Claude Mckay Love, a young boy who has been abandoned by his selfish parents in the South Shore neighborhood of Chicago. Raised by his spirited grandmother and her close friend Paul, a lovelorn queer man who suffers tragedy after romantic tragedy, Claude chases affection in a community where yearning is everywhere but real intimacy can be hard to come by. Potential friends, like the gifted basketball player Jonah, come and go, promising affection but always frustrating Claude's hopes. "[My] life went on like that," Claude remembers, "people coming and going, valuable things left in a hurry." Grandma is determined that, despite all this, Claude make something of his life. "I'm not going to lose you. You got something special deep in there," she tells him. But when a street gang–cum–political party called the Redbelters, led by the incorrigible demagogue Big Columbus, instigates a riot after a police killing of a young boy, Claude's entire life is turned upside down. In the riot's aftermath, Claude latches onto journalism as his passion, something that might lift him out of the South Side. It takes him from Chicago to Missouri, but when an old crush and family friend turns up in his college dorm one day, Claude learns that escaping the past is easier said than done. Bump brings a manic yet reflective energy to Claude's story. By telling it in short vignettes rather than a traditional narrative, he creates striking images and memorable dialogue that vibrate with the life of Chicago's South Side. Exchanges like one between Jonah's parents and Paul—over whether New York or Chicago is the mecca of basketball—are genuinely hilarious. The novel is almost devoid of a real plot or anything resembling well-rounded characters and threatens to become repetitive at times. In the end, though, Bump's voice is so distinct and funny that a reader might overlook those shortcomings.

A comic novel that is short on story but abundant in laughs.