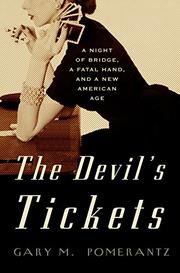 Pomerantz (Communication/Stanford Univ.; Wilt, 1962: The Night of 100 Points and the Dawn of a New Era, 2005, etc.) serves up intertwining Depression-era stories of bridge, high society and murder.

In addition to providing a biography of two of the card game’s great talents and popularizers, Ely and Josephine Culbertson, the author chronicles the emergence of bridge and examines a sensational bridge-related murder trial in Kansas City. Pomerantz looks back at the shooting of Jack Bennett, who, over a bridge table, slapped his wife, Myrtle, a few times. She promptly got a gun and shot him, then was acquitted in an O.J. Simpson–like murder trial in 1931 that featured a frenzied media and a dramatic defense attorney, former U.S. Senator James A. Reed, a fiery old-school orator. The author interweaves the tale of the Culbertsons, especially of Ely, a full-fledged egomaniac with a gift for self-promotion. Culbertson challenged and defeated experts on both sides of the Atlantic, and the press enthusiastically covered the encounters. But he eventually became too eccentric even for wife Jo; they divorced and he remarried—and divorced again. All the while he clung tenaciously to his bridge reputation and was not displaced until the emergence of new guru Charles Goren in the ’40s. Pomerantz supplies sufficient bridge history for the uninitiated and includes explanations and a glossary. In the final chapters, Pomerantz appears in the first person, telling us what happened to everyone. He finds and fires a gun like the death weapon, interviews people who knew the principals and walks around the apartment where the shooting occurred. Unfortunately, cliché occasionally creeps into the generally lively text—“It brought chills,” he writes of his murder-scene visit.

The author capably records the fading echoes of all the gaiety and gunfire, but he tends to attribute more cultural consequence to these events than they merit.